By Amanda DiepDecember 21, 2021No Comments

The pandemic-induced baby bust was widely covered in the media, with a range of opinions on what a reduction in birth rates would mean for the economy. Global Footprint Network partner the Center for Biological Diversity analyzed U.S. media coverage of birth and fertility patterns during the pandemic published between March 18, 2020 and June 15, 2021. Thirty news reports, 16 opinion pieces, and two interviews were analyzed from mainstream media outlets including ABC, CBS, the BBC, and local newspapers such as the Baltimore Sun, Los Angeles Times, and the Palm Beach Post.

The Center found a wide range of framing on the baby bust. Of the media coverage analyzed, 11 framed the slowing population growth in a positive light and 15 in a negative light, while 9 pieces offered opinions from both sides and 14 were neutral — reporting strictly on facts without framing falling birth rates as positive or negative.

Common themes in the pieces that celebrated the baby bust were increased access to reproductive health care and improvement in gender equity. Common themes of the pieces that framed the baby bust negatively cited concerns that the baby bust stems from the lack of adequate social safety nets within the United States — which have been amplified by the pandemic — and the economic and social implications of an aging population without a hearty younger population to replace them.

London-based organization Population Matters found that the narrative highlighting the negative economic consequences of a baby bust is dominant in Europe. However, in their recent white paper, they concluded that, “embracing and promoting lower birth rates and fertility is essential to planetary health and thus long term economic sustainability. The consequent challenges of ageing populations can be met through positive policy solutions, and pose no threat to long term economic sustainability.”

So, how do changes in population affect humanity’s Ecological Footprint?

Fertility rate (defined as the average number of children a woman gives birth to over her lifetime) and average age of motherhood play an important role in determining how much pressure our population puts on the planet. How would humanity’s Ecological Footprint be affected if the global average fertility rate decreased? How would an increase in the average age of parenthood affect the number of Earths humanity would need?

Try out the interactive population simulation model below to project how humanity’s global Ecological Footprint might change through 2100 based on the scenario of your choosing! 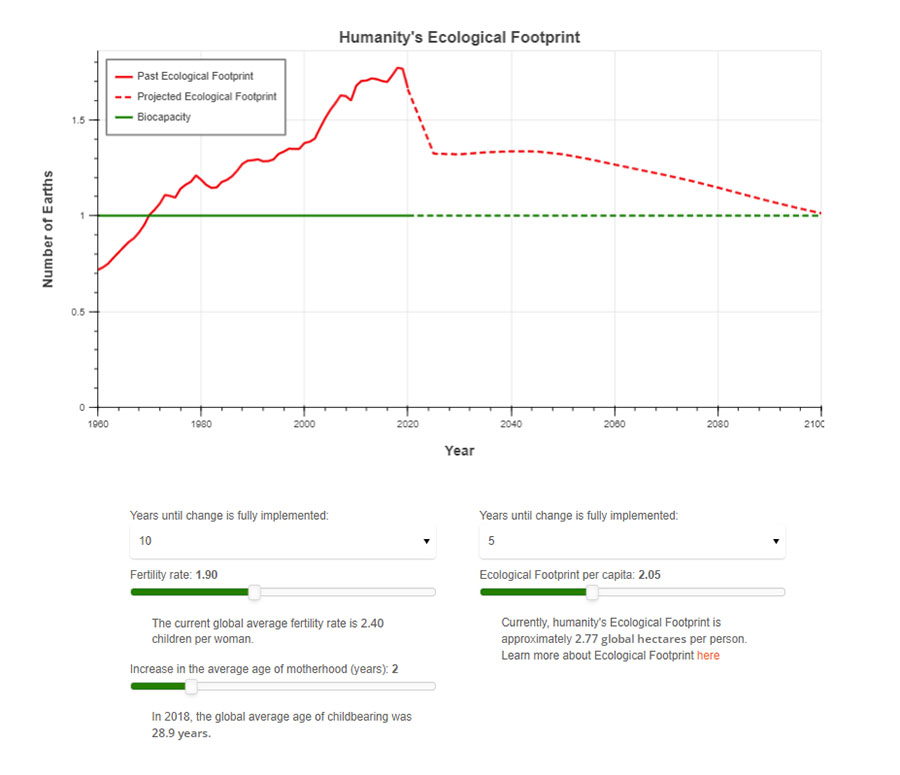