Ever since I co-founded Global Footprint Network in 2003, the organization has advocated for taking the population dynamic seriously. The commitment has always been to fair, compassionate, and generous strategies. Successful approaches are only those grounded in love of all people. In addition, we reject the racist, sexist, and paternalistic approaches, and feel for the pain they have caused.

Even though encouraging smaller populations has some of the highest, most cost-effective long-term benefits, making the case for seriously and compassionately discussing the positive impact of investments in turning the population trends has been difficult. Yet, empowering approaches that fairly and compassionately help humanity reach smaller population numbers are positive not just for the environment, but for health and educational outcomes. Reversing population trends is also tightly linked to equal rights for all people independent of sex, gender, sexual orientation, age, etc.  We at Global Footprint Network would advocate for those rights even if it had no environmental benefits.

Because of cruel parts of the history of the population debate (including eugenics, use of terms like “population control”, racially based immigration policies, and forced sterilization), there are powerful reasons not to include population conversations when discussing sustainability. David Roberts explained in his thoughtful VOX article that “there’s much downside and not much upside to talking about population.“ But how likely are we to succeed in not running down the planet, and with it many human lives, without turning around the population trend, especially if we also advocate for high levels of human development for all?  How would we succeed in turning the trends if we are not even able to talk about them?

Global Footprint Network does not focus on the question of who is to blame. That is generally counterproductive. Rather, we inquire, given ecological constraints, how can we best support all those who will have to operate on this planet for many decades to come? What are the most helpful scenarios for humanity so all can thrive within the ecological constraints of the biosphere?

Our approach is consistent with the one proposed by John Holdren, Anne Ehrlich, & Paul Ehrlich, which they called IPAT, or what in climate debates is now often called the Kaya identity. The Ecological Footprint translated this concept into real numbers using Ecological Footprint and biocapacity accounts. The accounts capture all competing demands on the biosphere, and thereby illustrate the overall imbalance between human demand and what Earth can regenerate, as well as how various factors have contributed to the overall demand.

Through our work, we have provided ample evidence against the common misperception that we are caught in a “tragedy of the commons” where the right action is necessary for humanity, but little of the benefit comes back to the individuals. In contrast, we demonstrate how sustainability actions have an immensely positive effect on everyone involved. 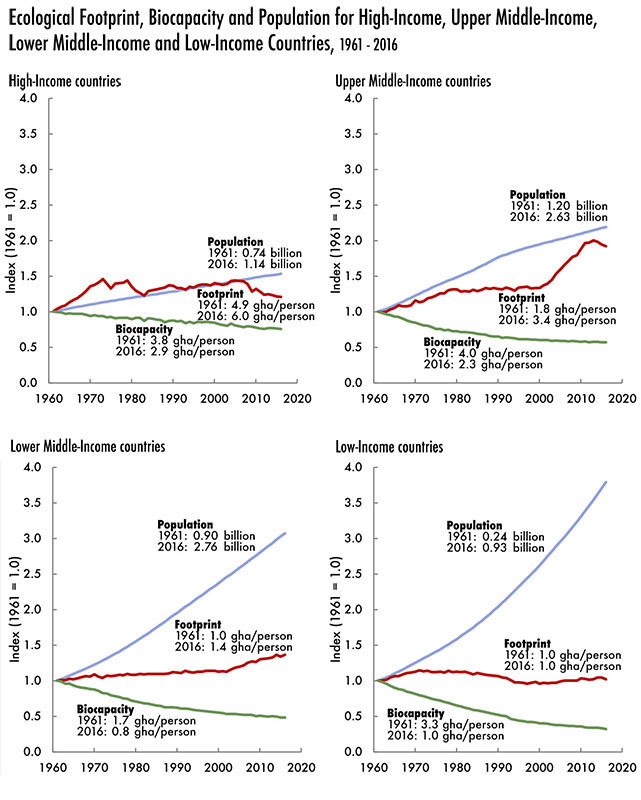 Population, per person Footprint and per person biocapacity trends for four income groups. None of the regions has had a more rapid increase in per person demand (Footprint) than the population increased. This is not to deny that distributions within countries have been grotesquely uneven.

As an organization, Global Footprint Network has been working to help shift the discussion around population in a compassionate and productive direction. This has included helping larger organizations reframe their population debate. We reintroduced the population discussion back into WWF over a decade ago in its 2008 Living Planet Report. I also participated in a seminar on biological extinction at the Pontifical Academy of Sciences (2017), where significant time was dedicated to discussing the population dynamic (the findings from the seminar are now out in a Cambridge University book, edited by Peter Raven and Partha Dasgupta, under the title Biological Extinction). We also participated in a publication about “Underestimating the Challenges of Avoiding a Ghastly Future” which got significant attention.

And in 2020, we have invited a selection of predominately young people to present their perspectives on the population discussion and whether it is productive to be more explicit in our public conversations about the population conundrum. I am grateful for their contributions and the opportunity to learn from them as we all work together to #MoveTheDate of Earth Overshoot Day.

For additional information on how Global Footprint Network approaches population in our work, I invite you to check out my detailed briefing here. And I am always eager to learn about your reaction.