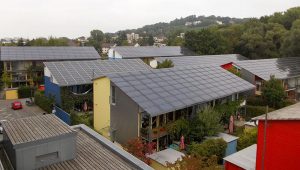 The tree population has been preserved as far as possible. Green spaces between rows of houses provide green space and offer play areas for children. Parallel to the private structures, there are now a school, kindergartens, youth facilities, a civic meeting place, marketplace, and recreational and play areas. Green flat roofs store part of the rainwater, which is collected.

The residential area is traffic-calmed. A large proportion of households are car-free, and private vehicles are parked in one of the two neighborhood garages. Since 2006, the residential area has been served by a light rail system. Many residents happily live without cars and use public transport and bicycles instead.

More information:
In German
In English