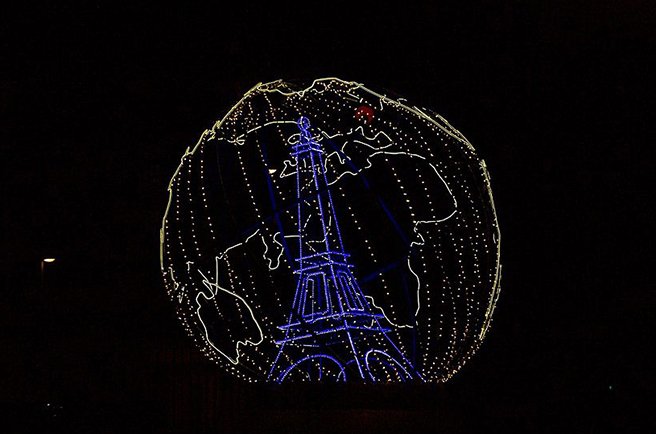 From Paris to the Philippines, climate change is here. Now what?/ GLOBAL FOOTPRINT NETWORK

Despite the tragic events in Paris last month, expectations remain high for a global climate agreement in the City of Lights. The focus is on country-specific pledges for reducing emissions and powering up renewable energy in order to remain below the 2-degree-Celsius warming threshold.

Such commitments can’t be confirmed and implemented too soon. And now more than ever, we need to look the reality of climate change in the face, beyond the seemingly abstract number conversation.

The man-made production of carbon emissions in excess of what the planet can absorb has not been occurring in a vacuum. Rather, it is one of the damaging effects of our fossil-fuel dependent, industrialized world—together with deforestation, topsoil erosion and biodiversity loss, to name just a few. Consequently, phasing out fossil fuels requires a holistic, innovative framework for development that includes not only renewable energy but also the responsible management of all renewable natural resources. The archipelago is on the frontline of climate change, as then Philippines Climate Change Commissioner Naderev Saño told the world in his impassioned speech on the first day of the COP19 Climate Change Summit in Poland (click here, then scroll to 7:14-7:33), There, Pacific typhoons wreck infrastructure, land and lives with increasing frequency and destructive power.

At the same time, economic development and population growth in the Philippines have caused its Ecological Footprint to triple in the past 50 years. The country now demands twice the amount of renewable natural resources that its ecosystem can sustainably provide. The growing pressure on forests and agricultural land, compounded by unchecked land use, has led to the land’s and its inhabitants’ weakening resilience in the face of natural disasters.

In this context, we’re encouraged to see that the Philippines government has made climate change and environmental risks a political agenda priority. The Philippines has submitted one of the most ambitious pledges to the COP 21 climate talks in Paris, envisioning a 70% cut in its carbon emissions by 2030 if it receives the financial and technical support the country needs to fulfill its commitment.

President Aquino, who spoke in Paris this week and launched the manila-Paris Declaration of the Climate Vulnerable Forum (CVF), is the very first leader in his country’s history to create an environmental and climate change cluster in his cabinet. The 2009 Climate Change Act mandated the mainstreaming of climate change into the government policy formulations, the creation of the Climate Change Commission and the development of the National Strategic Framework and Action Plan on Climate Change (NSFPCC). It also tasked the Local Government Units (LGUs) to draft their respective climate change action plans in sync with the national framework.

Simultaneously, the Philippines has been taking significant steps towards improved resource management. On May 2011, President Aquino launched the National Greening Program (NGP), which aims to plant 1.5 billion trees in around 1.5 million hectares of public lands by 2017. The following year, he supported the Ecological Footprint of the Philippines Report: A Measure for Resilience. A second Ecological Footprint study was published in 2013, with a special focus on the Laguna Lake Region, the country’s largest lake ecosystem, which includes Metro Manila—the most densely populated area on Earth and most vulnerable region in the country. Meanwhile, the public climate change and environmental debate has been growing strong in the street. Devastated by regular, violent and deadly typhoons, more and more Filipinos are demanding that the government take action to help adapt in the short-term as well as prevent worse-case scenarios in the long term. Filipinos staged their own climate march, last Sunday, ahead of the Paris Climate Summit. A major public demand over the past couple of years has been hinging on the vote of “green bills” – the National Land Use Act (NLUA) and Forest Resources Bill. The NLUA has been described as the keystone to responsible natural resource management in the Philippines, and is now pending in the Senate after being approved in the House of Representatives.

Despite clearly defined goals and intent, the road ahead is certainly a bumpy, challenging one, with immediate financial considerations playing a leading role. For now, climate and environmental advocates in the Philippines are trying to wrap their head around the recent announcement that the country will authorize 23 new coal pants on the grounds of reliable, affordable power. “It’s a crime against humanity,” Senator Loren Legarda, who chairs the country’s Senate Finance Committee and has pushed through new legislation on climate change and energy, told the BBC. “Coal is never an option, coal is not cheap. It pollutes the already vulnerable environment— it kills our air, it kills our biodiversity. Why are we approving coal? It does not make sense. We are victims of climate change and we want to exacerbate it? It does not make sense.”

Senator Legarda was recognized this week in Paris as a Global Champion for Resilience by the Special Representative of the UN Secretary General for Disaster Risk Reduction. Soon he’ll be back home with President Aquino, who defended new generation coal power as the most affordable option available to help bring many people out of poverty. By the end of the climate talks we may find out whether the Philippines leader was bluffing with a view to forcing the hand of wealthy countries into funding climate solutions in the archipelago, or whether coal power truly won. Either way, we’re committed to helping the Philippines stay the course of natural resource accounting and responsible management in the long run. Strong ecosystems make for better resilience. And we choose to believe that sustainability practice breeds more sustainability practice.